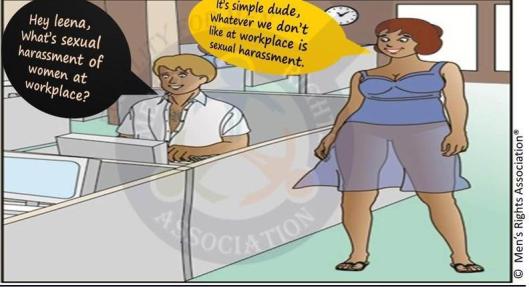 Men’s rights organisations have come out strongly against the decision of the Lok Sabha which cleared the Sexual harassment of women at workplace bill without any discussion.

On the September 3, the Lok Sabha cleared this bill without any discussion. When over 35 countries have this law Gender neutral, why is it anti male only in India? Why is it being passed without any debate in Loksabha, they asked.

We feel that this proposed law will completely destroy the workplace harmony.

Will convert professional rivalries and jealousies into frivolous complaints and will become yet another source of extortion of a man’s money.

Will motivate companies to stop hiring of female candidates.

Will put Corporate honchos, bureaucrats, politicians and all male employees at the mercy of women who can simply use (read misuse) this law to cover their incompetence.

Will create further anti-male gender bias in the workplace and will contribute to more men committing suicides.

Already men commit suicides to the tune of 4 times compared to women in workplaces as per data by the Union Home Ministry of India.

Brief background of the law:

This bill has been proposed in 2007 based on judgment by the Honorable Supreme Court in the Vishakha case.

Men’s Rights Association opposed it even at that point of time and the bill was finally sent to a Parliamentary Standing Committee in the year 2010.

Men’s rights activists deposed before the committee in 2011 and based on their representation, the Committee recommended the Government. of India to make the bill gender neutral and provide protection to men as well.

In 2012 May the cabinet approved the law, without taking into consideration, the recommendations made by the Parliamentary Standing Committee.

This clearly exposes the double standards of the Government. and it also brings forth the fact that sending it to the Parliamentary Committee was just eyewash and the Government never really intended to provide men, a safe atmosphere to work in office.

India is an isolated country:

It is extremely surprising that when most of the countries are moving forward and coming up with gender neutral laws, India is moving back in time and is all set to pass an anti-male and a gender biased law.

This law is Gender Neutral in most of the countries where it is prevalent.

According to a report on Sexual harassment at workplace by United Nations Economic Commission of Europe, around 25 countries in and around Europe and Asia like Austria, Belgium, Cyprus, the Czech Republic, Denmark, Estonia, Finland, France, Germany, Hungary, Ireland, Italy, Lithuania, Luxembourg, Malta, the Netherlands, Poland, Portugal, The Slovak Republic, Slovenia, Spain, Sweden, United Kingdom have policies for Sexual Harassment, that are gender neutral.

Men’s Rights Association clearly and categorically opposes the announcement made by the Ministry of Women and Child Development (WCD) ministry made on the 21st of August 2012 that it intends to conduct a study on the sexual harassment faced by men.

However, it also said that the study was a matter of future and currently the law should be passed as it is i.e. gender biased and anti-male in nature.

It is the same WCD ministry that has gone on record to say that, “Protection of men is not their mandate” and now that they are facing opposition from some quarters of the Government. of India in getting this biased, anti-male and extortionary law passed, they have started to make hollow claims of promising to study harassment of men.

Whereas in reality, when they have already gone on record to say that it is not their mandate to protect men, it is very clear that their intention of studying sexual abuse of men is not at all a bonafide one and is subject to strong suspicion.

This announcement is just a diversionary tactic from their side so that the law gets passed the way they want it and later the same can be used to extort and blackmail men at workplaces too.

Some of the common forms of such harassment which males face, from their female colleagues in their workplace are,

Lewd remarks about the dressing sense of men.

Bold comments about physique and physical appearance of men.

Calling a male colleague inside a cabin and try to talk personal matters with him in office hours.

Requesting a male colleague to stay back late at night and accompany or ask for a drop.

Talking about sexual matters freely with a male colleague despite his discomfiture to the same and ignoring his warnings at times to not to discuss such matters with him.

Asking out a male colleague.

These and many other forms of sexual harassment of men, more often than not go, unnoticed and unreported primarily because,

It is unmanly for men to complain of sexual harassment.

Society refuses to believe that men can be victims of feminine sexual aggression.

Men are socially conditioned to accept welcoming and approaching gestures from females sportingly and in this process their own choices, aspirations and emotions are mercilessly trampled.

Society ridicules men who are uncomfortable in female company by giving them name tags such as “boring, fag, sissy, geeky, nerdy” etc. Such social mindsets often force men to “look” happy in a female company and it also trivializes their concerns from a male sexuality perspective.

Adverse media coverage and systemic gender bias against men suppresses them to a larger extent and truth barely and rarely comes out.

The association demanded that the Government. of India must not pass this law in the current form and it must consult the men’s rights organizations, make it gender neutral including its title and then only pass it.The new bill must be re-drafted by a neutral ministry like the Ministry of Law and Justice or the Human Resources Development ministry. The draft prepared by the WCD ministry must be discarded as a ministry that openly justifies its anti-male stance cannot be allowed trample the Constitutional right of men which entitles them to a safe working environment. The WCD must be stopped from conducting any study on male issues. Government must form a separate commission, called the National Commission for Men, containing people who have championed the cause of men’s rights and such a commission must study male issues.

This site uses Akismet to reduce spam. Learn how your comment data is processed.